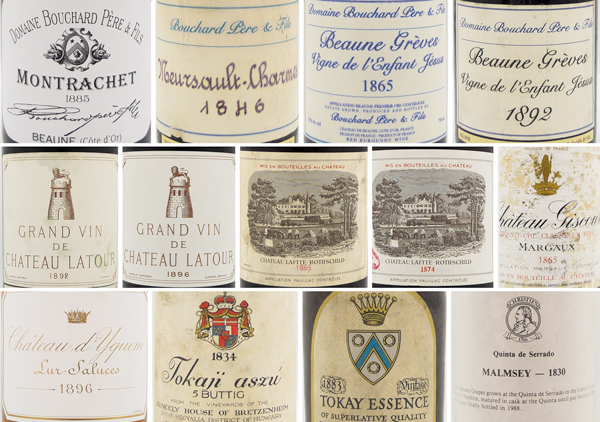 Hong Kong-based wine importer The Fine Wine Experience has unveiled arguably the most expensive wine dinner in the city at HK$108,000 (US$13,800) a head, featuring a lineup of 14 rare bottles from the 19th century, including a few pre-phylloxera wines from Bordeaux and Burgundy.

The dinner scheduled for October will feature at least four pre-phylloxera wines, two from Burgundy’s venerable estate Bouchard Père & Fils in Beaune, and another two from Bordeaux – the 1865 vintage of Bordeaux first growth Château Lafite Rothschild and third growth Chateau Giscours, in addition to wines over 100 years old from Château Latour and Château d’Yquem.

Phylloxera devasted European vineyards in late 1800s, forcing vineyards to graft vines to American rootstocks that are resistant to the small yellow root-feeding aphid, hence leading many to believe that pre-phylloxera wines are superior.

The question hanging on everyone’s mind when the lineup was announced was provenance, to which Fine Wine Experience founder Linden Wilkie assured, was “the first priority” when launching the event in Hong Kong, following previous editions in London with auction house Christie’s.

Four wines from Burgundy luminary Bouchard Père & Fils will be on pour at the dinner including a 1846 Meursault-Charmes, 1865 and 1892 Beaune-Grèves Vigne de l’Enfant Jesus in addition to 1885 Montrachet. The wines, according to the merchant, are all consigned by the domaine to auction and directly sourced from their cellar in Beaune.

“The maison takes great care with its treasures – recorking every few decades, topping up with the same wine from a bottle sacrificed for the job, and discarding bottles that have become out of condition,” he told to dbHK.

Another unmistakable star on the list is the pre-phylloxera Château Lafite Rothschild from Bordeaux’s “landmark” 1865 vintage. The last time auction house Christie’s sold a bottle from the vintage in 2006, it fetched US$10,575. Another Lafite is from the 1874 vintage. The two bottles came from the cellar of a ‘notable’ US collector who had been buying 19th century wines since the 1960s, according to Wilkie, without disclosing his name.

Further expanding, he continued, “His collection came to market in 2000, and a few bottles have surfaced from time to time originating from this sale since then. Back in the 1960s and 1970s, when wine auctions were a new thing, large quantities of 19th century wines were packed up from aristocratic European homes and sold. Such cellars are hardly ever found these days.”

The same collector also supplied the 1892 Château Latour, while the other 1896 Latour was later released by the first growth chateau in 2003, he added.

The 1896 Château d’Yquem in the lineup came from an American collection, he told dbHK, and was recently inspected and re-labelled by the château’s maitre de chai Sandrine Garbay a few years ago.

The 1865 Château Giscours, as he explains, came from a European collection, accumulated over several decades and offered to Fine Wine Experience via a merchant who has been specialising in rare wines for many decades, without disclosing names to dbHK.

The 1898 Jean Bourdy Blanc Vieux d’Arlay from Jura, according to the merchant, also came directly from the winery. The 1834 Tokaji Aszú 5 Buttig, ‘Princely House of Bretzenheim’, and Tokaji Essence, ‘The Baron Maillot’ according to Wilkie boast impeccable traceability. The two bottles first came to the market in 1930s in the UK via Berry Bros &Rudd.

“Our two bottles were the property of well known and highly regarded wine merchant and connoisseur John Avery. He bought the bottles from Christie’s in 1976 and they’d been in his superb Bristol cellar since then,” he told dbHK.

In addition to provenance, another question that begs the question is whether these more than a century and half old wines have already turned to vinegar.

Admittedly great wines can age for decades, but can they withstand the test of time for more than 150 years? Asked by dbHK about the wines’ drinkability, Wilkie replied: “All wine becomes undrinkable in the end – none is truly immortal, though some are known to be able to age for decades and even centuries… Great examples from great terroir from 19th century vintages, if well-stored and cared for, can still be delicious.”

“Sometimes they can be dead, of course. Other times they can seem faded, delicate, a bit fragile. Other times they can be remarkably delicious, full, and alive. Very occasionally they can be as objectively great a glass of wine as anything from the 20th or 21st century – even after all this time. That’s special. But its not the main reason to explore such old vintages. It’s the privilege to taste something previous generations have conserved for us, and it satisfies a certain curiosity for something ancient yet – hopefully – alive.”

To discover the wines’ drinkability is a risk that will cost you HK$108,000 a head.